Air Doctor is a new Japanese technology utilizes the triple power of chlorine dioxide gas (CD) at low concentration (0.03 PPM) for prevention of airborne Infections, either bacterial, viral nor fungal infections. Air Doctor has A Worldwide patency certifcate for the new precise technology.

Is a powerful anti-microbial agent was discovered in 1815 by sir Humphrey Davy, in England and it used since a long time till nowadays for water purifcation, food preservation and has a trust medical history in sterilization and sanitization process. In 1910 Lewis succeeded to discover the structure of Chlorine dioxide is a neutral chlorine compound. It is very different from elemental chlorine, both in its chemical structure and in its behavior. One of the most important qualities of chlorine dioxide is its high-water solubility, especially in cold water. Chlorine dioxide does not hydrolyze when it enters water; it remains a dissolved gas in solution. Chlorine dioxide is approximately 10 times more soluble in water than chlorine. it has density 2.4 times as Air, and it undergoes all the chemical reaction through oxidation which ensures its safety on human health by avoiding yielding of byproducts.

1- Chlorine dioxide (CD) reacts with cell wall of the microbial organism resulting in a high oxidation which can break up the cell wall and allowing (CD) to penetrate the microbial cell.

In 1999 a team of scientists has discovered a new way to get ClO2 gas by impregnation of Zeolite by using sodium chloride and it was a gate for a new technology foe using of chlorine dioxide in different felds particularly, the medical feld. In 2009, Ogata did several tries for generating chlorine dioxide by mixing sodium chlorite with natural zeolite, in 2013, Ogata succeeded in generating chlorine dioxide by this method with concentration of 0.03 PMM which is the safe concentration approved by WHO, FDA and EPA. And this is the new Japanese technology used known as AIR DOCTOR. \ Air Doctor is good for 30 Days once opened and can be used for Kids, pregnant women, elderly people, Immunocompromised patients, Doctors, Nurses, travelers and during Hajj and Ummra.

Outcome and survival after solid-organ transplantation improved signifcantly in the last 10 years, leading to a need for new and effective preventive measures to maintain general health (1). Immunosuppressive regimens put these patients at higher risk of lifethreatening infections. Protective measures including face mask, prophylactic antiviral and anti-bacterial drugs can prevent disease and decrease the replication and dissemination of infectious microorganisms especially in the frst 3 to 6 months post kidney transplant Vaccine preventable diseases account for a signifcant proportion of morbidity and mortality in transplant recipients and cause adverse outcomes to the patient and allograft. Dead-vaccines can be administered post-transplant, however, the effcacy, safety, and protocols of several vaccines in this patient population are poorly understood. Due to immunosuppression regimens, several questions arise. First, are vaccinations effective when administered after transplantation, in both the early and late periods? Second, what are the side effects of vaccines in immunosuppressed patients and what is their impact on graft function? The main theoretical co wed signifcantly

lower antibody titers in kidney transplant recipients vaccinated within 6 months of transplantation when compared to healthy control suggesting the limited beneft of infuenza vaccine in the frst 6months(8). A Recent device that uses deodorant sanitization with Chlorine Dioxide power is being recommended as airborne protective device to prevent against respiratory infection without side effects. In the year 2018 we started recommending the uses of this device to our patients immediately post living kidney transplant up to 6 months and then we did a retrospective review study comparing the results to the previous 3 years.

Purpose of the study

Evaluating the use of deodorant sanitization with Chlorine Dioxide power as extra protective measure in preventing airborne respiratory infection in the frst 6 months post living kidney transplant during which the immune-response to vaccine is expected to be low.

We reviewed medical records of Living Related Kidney Transplant patients treated by our Arab Renal Care Group in Jordan for at least 6 months post-transplant since 2015 and recorded the number of respiratory infections developed in the frst 6 months post kidney transplant. We then compared the results to year 2018 when we started recommending the use of the deodorant sanitization with chlorine dioxide power as protective measure to lower rate of respiratory infection post kidney transplant.

Gas-generating devices of chlorine dioxide (ClO2) are used as deodorant of rooms. It happened to use a commercial tabletop deodorant canister that releases extremely lowconcentration ClO2 gas in a school classroom as deodorant. It was found retrospectively and unexpectedly that during a period of 38 consecutive school days the rate of school children absent from the school was markedly lower (1.5%) in a classroom where the ClO2 device was placed than that (4.0%) in a classroom where it was not placed. The percentages of absenteeism between these classrooms (1.5% vs. 4.0%) were signifcantly (p < 0.00001) different. The predominant causes of absenteeism during the period were common cold and infuenza. Judging from the known viricidal activity of ClO2, our unexpected fnding in the school classrooms strongly suggest the usefulness of extremely low-concentration ClO2 gas to prevent respiratory viral diseases in semi-closed areas, such as theaters, hospitals and aircraft, without necessitating evacuation.

For this retrospective analysis, data of 184 adult living kidney transplant recipients were collected during January 2015 to December 2018 from our patients transplant medical records in Amman Jordan (Figure1). All patients diagnosed with Respiratory Infection had a Chest x ray and few patients had undergone chest CT scans.

The study demonstrated that deodorant sanitization with chlorine dioxide power is an infection control modality that may provide beneft to kidney transplant patient in the high-risk period post-transplant without reported side effects. It decreases the incidence of respiratory infection especially in the frst 6 months when the immune-response is expected to be low and risk of respiratory infection is high. Further studies are required to support the effectiveness of our implementation.

Infuenza virus infection spreads via an aerosol from the human respiratory system. We have conducted a feld test to verify if the infection can be effectively prevented by using Air Doctor Portable.

Group of Children who have worn Air Doctor Portable 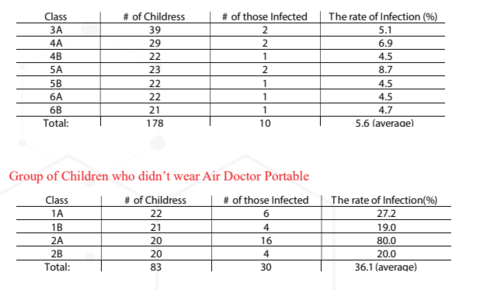 You can use the following document for more study and proof :